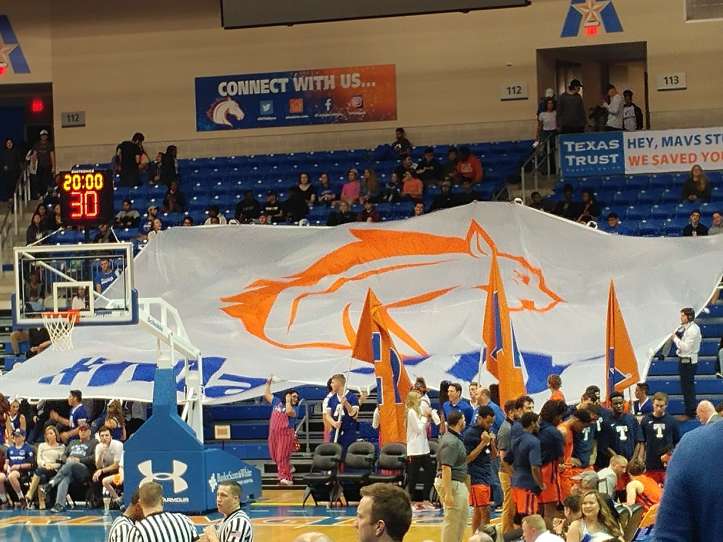 UTA 67-58
UTA (17-13, winners of 13 of their last 17) slowed down one of the top-scoring offenses in the Sun Belt in the first half, holding a very good 21-win Georgia Southern team to just 20 points in the opening frame. UTA, shooting the 3 well lately, used a familiar tactic–attacking the paint relentlessly and forcing the opponent out of the rhythm on defense.

After UTA found themselves up by 8 30-22 at halftime, Georgia Southern got the fast break going off several UTA misses and erased an 12 point UTA lead in the second half and lead by as many as 3 with about 3 minutes left. UTA went on a 10-nothing run over the final 2 minutes to take home the win.

You want the raw, up-close emotion of what it’s like to play for a title after you were picked 1️⃣1️⃣th in the preseason⁉️

UTA did a good job getting the ball inside in the first half, with Andres Ibarguen using his size and strength to be unstoppable on several difficult putbacks for 12 points (6-6 shooting,7 rebounds). Brian Warren scored 21 on 6-16 shooting and a rare 0-5 outside shooting performance. Patrick Mwamba used his quickness to get open shots all night, going 4-8, including 2-4 from outside for an efficient 10 points. The Mavericks got the ball to open shooters in the paint (20-14 points in paint advantage) for a lot of easy baskets. Georgia Southern’s star Tookie Brown was held to 8 on 2-13 shooting (0-5 from outside).

The Mavs’ 3=point defense was stellar again tonight, hurrying the Georgia Southern outside shooters into a 3-19 effort from deep. Overall Georgia Southern shot 36% for the game, UTA 39%. It wasn’t exactly perfect basketball at times in the 2nd half, but the Mavs–who have been in a lot of close games this year–stayed composed and played great basketball at the end of the game to take home the win.

Again, the Mavs won this one with hard work of defense and around the paint, and winning the battle of the boards (39-37). If the three gets going, Georgia State will have a tough time stopping the Mavs in a rematch of last year’s Sun Belt Tournament Championship game.

Georgia State, who held Texas State to just 15 points in the first half, defeated the Bobcats 59-46 to advance to tomrrow’s game. Georgia State  has a lot of players that can score the ball, and is extremely well coached. Tomorrow’s game could be one part athletic contest, one part chess match as two great coaches mix up their defensive and offensive schemes. The Mavs’ deep bench might be a factor if it’s a fast-paced game. ‘

Up next tomorrow: UTA vs. Georgia State 1:00 ESPN2