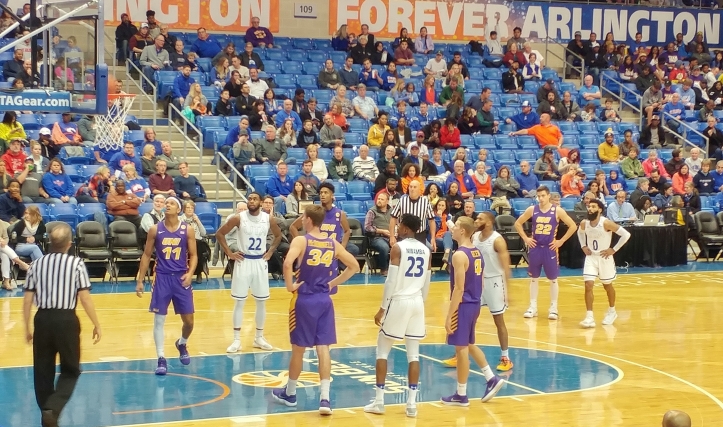 UTA, who looked impressive Tuesday night against a NAIA opponent, used a hot-shooting second half and a strong team defensive effort to defeat mid-major power University of Northern Iowa in front of a vocal College Park Center Homecoming Night crowd of 3,789.

An elite mid-major basketball program in recent years, Northern Iowa has been in the NCAA Tournament seven times in the last 15 years, and defeated top seed Kansas in 2010. UNI–who defeated UTA in Cedar Falls in the first game of a good home-and-home series–has had back-to-back seasons under. 500 and came to Arlington Saturday night with a young, talented, tall team featuring superstar guard A.J. Green, a four-star recruit ranked in ESPN’s top 100.
The first half was a tedious whistle-filled 20 minutes with neither basketball team really getting much rhythm offensively. Between stops in play, both teams shot the ball well in the first half (UNI 42%, UTA 40%). As they did against UT Tyler Tuesday night, the Mavericks again relentlessly attacked the paint and shot a lot of free throws to offset an 0-7 outside shooting half. Luckily, UNI wasn’t much better from outside, knocking down 2 of 12. The Panthers lead by 1 (33-32) at half.

Our players won this game. They came in focused and handled the ups and the downs, and at the end of the game they closed it out – and a lot of different individuals had a hand in that. Down the stretch we showed some toughness, some character and some connectivity.
–UTA Coach Chris Ogden

The second half was a much more fluid 20:00, a back-and-forth affair for the first couple of minutes (the teams tied at 39 with just under 17 minutes remaining) but the jumpers started falling for the Mavs and an Edric Dennis three put UTA up by 10 with 11 minutes left. A few baskets later, UTA would find itself up by as many as 11 but UNI slowly chipped away at the Maverick lead over the final 5 minutes or so, with a Spencer Haldeman free throw making it a one possession game (67-64) with just 53 seconds remaining. The Mavs showed a lot poise in the final minute to hold the lead, making 5 of 6 free throws down the stretch and ending the game with a nice David Azore dunk to make the final score 74-65.

Key stat: UTA found its outside stroke in the second half, going 5-12 (40%) while holding UNI to just 1-12 (8%) in the final 20:00. UNI, a much taller team than UTA overall, got some uncontested layups on defensive lapses and won the battle of paint (34-24) but UTA’s rebounding (37 vs. UNI’s 29) and hot three point shooting was just too much to overcome for the Panthers.

Offensively, PG Brian Warren lead the Mavs with 19 points on 8-12 shooting and 3-5 from the free throw line. His smooth jumper in traffic off the dribble was almost impossible to guard tonight, with a lightning-quick stroke that reminded me a lot of former Mav Bo Ingram. David Azore had another good game, scoring 16 points (4-11 FG, 8-8 FT). Edric Dennis had 11. Patrick Mwamba had 6 points on 3-3 shooting but had 4 fouls with 12:00 still to play

The defensive intensity was pretty good most of the night. UNI did good ball movement to find opportunities for good looks from short range and their height did create a few mismatches in a couple of one-on-one situations. The Mavs stole the ball 8 times, getting a lot of deflections and disrupting the Panther offense on other several possessions. Holding a good Division I team to just 3-22 outside is a great team effort defensively.

UNI’s star PG A.J. Green scored 17 points on 6 of 17 shooting, making just1-8 from outside. Green turned the ball over 5 times.

This win is something to build on for sure: it gave the Mavericks some valuable experience at holding a lead late against a very good opponent, which is not easy to do.

After watching the first two contests, this does not look a like a basketball team that has only played 80 minutes on the court together. While the offense isn’t as flashy as we’ve seen in the last few seasons, it looks to be pretty balanced and can score points in bunches in multiple ways–driving into the paint, making free throws or knocking down contested jumpers. The Mavs also seem to be defending well as a team, which could really help them win a lot of games this year.

Tonight’s effort would have definitely won a lot of Sun Belt games. The Mavericks have more games at home next weekend (Texas A&M-Corpus Christi Friday and UC-Davis Sunday) that offer very good opportunities for wins and more offensive fine-tuning before the schedule goes up another level with road games at legendary programs such as Indiana, Arkansas, Missouri, Gonzaga and Texas before conference play begins.