A Schedule for the Ages 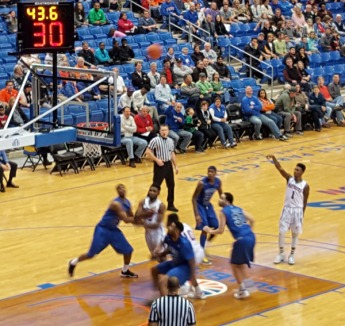 The 2017-2018 UT Arlington basketball schedule was released recently, and all I can say is that it’s the best single-year overall schedule that I can ever recall the Mavs putting together. It’s loaded with winnable games against well-known teams at home and on the road that should generate some buzz at the arena’s box office and help the Mavs’ chances for the postseason via strength of schedule and potential RPI ranking.

Mid-major scheduling is never easy: big schools pays mid-majors up to $100,000 to play on the road, and mid-majors with considerable smaller athletics budgets usually scheduling other mid-major or smaller-conference schools to fill out their home slates. In other words, a school’s relative position on the basketball food chain largely determines who it plays on the road––and who it is able to host. And when you win consistently, big schools with big paycheck generally (and understandably) avoid you. The Star Telegram wrote a good piece a couple of weeks ago about UTA’s scheduling difficulties, and this article from 2010 is quite interesting and still very relevant seven years later. You may even recall last year’s non-conference schedule that Texas Southern had to endure, playing in Arlington at 7:00 on a saturday night and then appearing for a lunchtime game in Delaware less than 24 hours later. So, a good strategy for top-50 RPI schools like UTA is to line up home-and-home series with other successful mid-major schools in similar situations. And for the upcoming season, this strategy appears to have worked to perfection.

Our fans and players will appreciate that we have some very good home games against quality opponents. Playing in College Park Center gives us a significant home court advantage, especially with the enthusiasm we experienced in last year’s NIT run.
–UTA head coach Scott Cross

So after going 15-1 at home last season and averaging 2,798 fans per game at College Park Center in 2017-2018, Coach Cross and his staff put together a great home schedule with some good opportunities for wins on the road as well. Fans will get to enjoy Arlington appearances by the always exciting Loyola Marymount, longtime rival North Texas, Conference USA member Rice, metroplex foe University of Dallas, Cal-Poly and the fast-paced squad known as Dunk City (Florida Gulf Coast).

Conference games are back to Thursdays and Saturdays this season (except for the east coast swing at Coastal Carolina and Appalachian State in December). Arkansas State has a new coach and big-time recruits and the games against former Southland coaches Bob Marlin (Louisiana) and Danny Kaspar (Texas State) have become annual can’t-miss games on the schedule.

With Texas not renewing the seemingly yearly series with the Mavericks, this year’s non-conference road games will include a tantalizing rematch with BYU, a 22-win squad the Mavericks simply destroyed in Provo in the 2016-2017 NIT with a statement-making 105-89 win. With the Cougars healthy and the Mavs graduating four key seniors, UTA may have a tough time following up what may have been the biggest win in school history.

We’ll over-analyze this slate much more in the coming weeks, but for now, here’s a calendar-style look at the challenging path the Mavs will have to take to the NCAA tournament: