The Mavs (11-2) have been nearly unbeatable all year, undefeated at home…so give Georgia Southern’s young team credit  (11-of-12 scholarship student-athletes who are freshmen, redshirt freshmen or sophomores), for doing their best to pull off a road upset. The Eagles (4-8) played an impressive first half, making 7 of their first 8 three point attempts and holding a 25-14 lead at one point.

GS freshman Tookie Brown, who was named the Sun Belt Player of the Week by College Sports Madness after averaging 24 points in three games from Dec. 15-22, found himself with a nice night in progress with 8 points on 2-2 shooting. But he had 3 fouls by halftime and saw limited minutes (only 8) the first half.

The Mavs chipped away at the lead, making 6-16 from outside went into intermission with a 42-39 lead. In the first half, Drew Charles and Erick Neal both had 9 points, Jalen Jones had 8. Kevin Hervey was 0-4, missing all 4 three point attempts but making 3-4 FT.

But I think we all sorta knew how it’s very rare for a team to stay that hot all game, and if they cool off from outside, can they make jumpers or find ways to get to the free throw line? Would the Mavs and Kevin Hervey get hot or would this be a close game the final 20:00 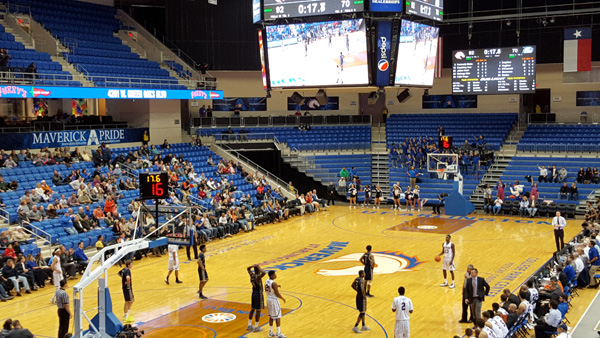 Overall, a good win for the Mavs, who are scoring tons of points and passing the ball and rebounding very well every night. The Eagles are young, don’t have a ton of size but have some players that can definitely shoot it. Guard Mike Hughes was 10-17 (4-8 outside) for 24 points and Brown finished with 17 despite playing only 22 minutes. Will be interesting to see how their team develops the next few years.

Up next: at Appalachian State on thursday, followed by road games at Troy and South Alabama as well. Appalachian State is 2-11 overall (0-2 in conference, wins over Jacksonville and Liberty) and has lost 8 straight. Troy is 5-8, 0-2 and South Alabama is 5-8, 0-2. It’s hard to win on the road in our conference, but based on how well the Mavs are playing and the records of upcoming opponents the next few games might be a good chance for the Mavs to pick up at least 2 victories I’d think.