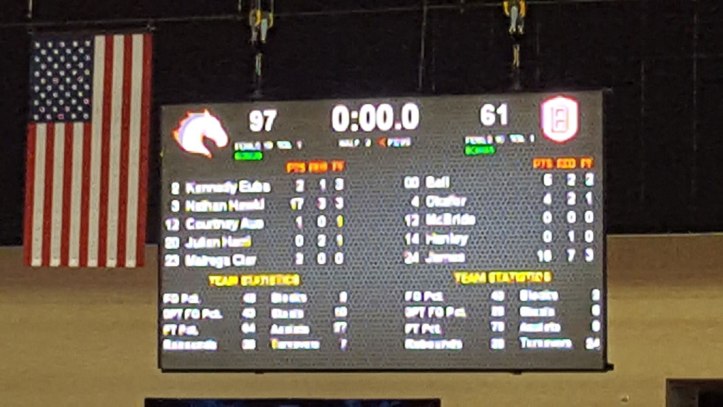 Bradley, a school that has a rich history of success (37 NBA draft picks, played in 35 postseason tournaments and won 12 conference titles), is the youngest team in the country. A quick look at their roster lists 10 freshmen (one a redshirt freshman), a sophomore, a junior and two seniors. Bradley was 1-8 before tonight with its single victory by one point over Ball State (who has only one other loss this season, to Eastern Kentucky).

UTA, whose dreamlike season has included wins over Ohio State, Memphis, UTEP, Rice, North Texas, Grambling and Fordham is playing arguably its best basketball in the school’s history and was probably expected to win this game by a large margin. 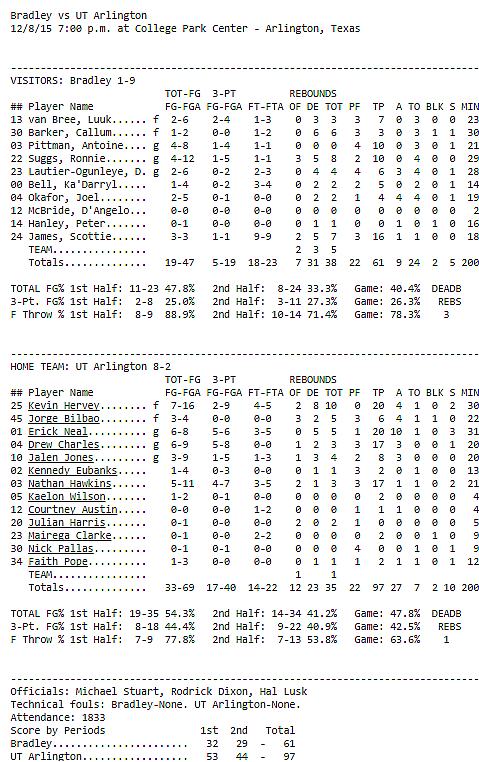 And as young as Bradley is, they definitely have some good overall talent, some size at the 4 and 5 positions and shot an impressive 47% in the first half. Scottie James, a 6-7 freshman, was pretty much unstoppable scoring 16 with a perfect shooting night of 3-3 FG, 1-1 from outside, 9-9 free throws and 7 rebounds. BU also outrebounded UTA 38-35.

But UTA’s defense forced 24 BU turnovers, leading to 36 points and that was the difference maker in this game. Mavs applied a lot of pressure on the young guards and, as we’ve seen all season, miscues turn into fast-break points a high percentage of the time. The Mavs did a great job of protecting the ball, with only 7 turnovers. If you remember the first half of the OU game at College Park Center or the last North Texas game at Texas Hall, the defensive intensity was on that level.

Mavs swarming on defense. Bradley having tough time getting ball upcourt and shot click in single digits when BU gets a shot up.

Add a school-record 17 3s (17-40 for 42%) and hence the large margin of victory. Nathan Hawkins had his shot going tonight, and was 5-11FG, 4-7 from outside with 3-5 FT for 17 points and Drew Charles was 5-8 from outside in a 17-point night as well. Erick Neal was 5-6 from outside and scored 20. Hervey had 20 points (most of them in the first half) with an efficient 7-16 shooting night. The Mavs again moved the ball around the court with pinpoint passing and created open shots all night long.

Next up: Sul Ross State, Monday, Dec. 21 at College Park Center. Sul Ross is a division III school located in Alpine, TX is 1-5 on the season with a 16-point win over LeTourneau this season.