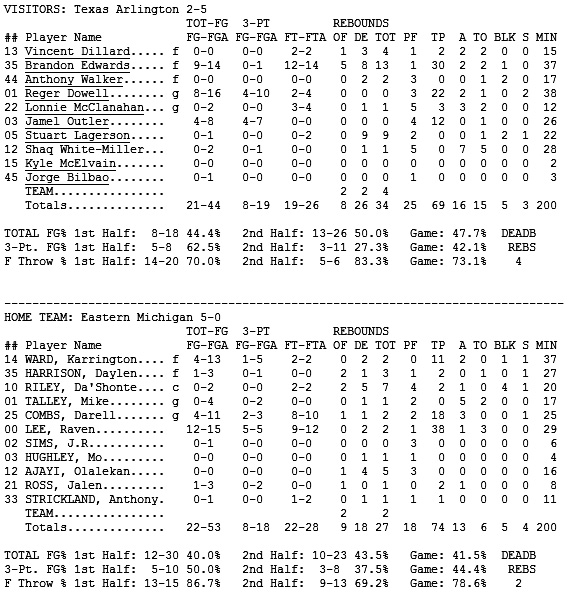 We were only down 7 points at halftime, not bad for a game on the road against an undefeated team that had beaten two teams that had previously defeated us in the last week. But, the second half comback for a much-needed road win didn’t quite happen. Edwards had a spectacular game (30 points, 13 rebounds, 12-14 FG). Dowell scored 22 and Outler made 4-7 from outside for 12 points.  Mavs got more rebounds which, with our size, should be a common occurance this season…but 15 turnovers in a game will usually make it tough to win.

So, a close loss leaves us at 2-5 in what’s turning out to be a tough non-conference schedule so far with a road game at Texas friday. Texas is 4-0 with surprisingly close home games against Mercer (won by 3), South Alabama (won by 7), SFA (won by 10) and an easier win over Houston Baptist (won by 28)…but the Longhorns will likely face tougher competition this week on the road at Kansas City with two games monday and tuesday against BYU, and DePaul or Wichita State.

If the Mavs pull an upset and beat UT, we’re 3-5. Otherwise we could be 2-6 going into our home games against Dallas Baptist (2-3 with wins over Dallas Christian and Mid-America Christian) and Weber State (0-2 with a 9-point loss at BYU and a 21-point loss at Colorado State with home games in Ogden, UT against Utah State and San Jose State before the game at College Park Center).

I’m confident this team will be good by the time conference play gets here. With so many new players, I expected it to take 10 games or so for this team to gel and become the Sun Belt powerhouse we know it can be. If you’re an opposing coach, do you rely on your standard defense or try to focus your defensive game plan on making sure Dowell and Edwards don’t have huge 30+ point games? And we’ve seen this season that other Mavs are definitely capable of huge games themselves. Good position to be in, I’d say.