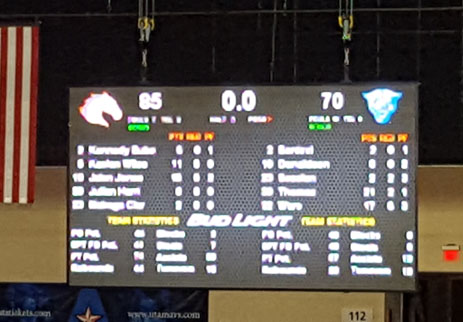 The story of the Mavs’ dream season has been well documented in the local and nation media…9 wins in 11 non-conference games thus far, victories against Ohio State, Memphis, UTEP, Rice and the OT defeat in Austin. Blowout wins over North Texas, Bradley, Grambling State. Kevin Hervey and Eric Neal averaging 17 points per game and 13 points per game respectively. A roster that is super-deep. Various rankings this season generally in the top 40 nationally. The Mavs lead the nation in rebounding at 44+ a game. Passing and assists that are becoming almost legendary, like something out of a video game.

But conference play started tonight, so none of that first paragraph means much if you can’t duplicate that success versus the teams you play in the final 18 games or so. Those are the games that determine the true success of a season. Those victories in late December, January and February grant you the opportunity to play even more meaningful games in March and hopefully April.

First game, tough opponent. The Georgia State Panthers were holding teams to 59 points a game and had a record of 7-2, with an RPI of around 50 (UTA 38). This year, they are playing without their star R.J. Hunter who is a member of the Boston Celtics.

And for the first 10 minutes or so, it was beginning to look like the Mavs might be on the verge of having an off-night against a team that, as of earlier this week, was 11th-best in points allowed this season.

With GSU defending the paint well, Kevin Hervey on the bench after being called for 2 fouls in the first 5 minutes (a defensive foul and an offensive charging call), and the Mavs not able to work the ball inside or drive for layups…UTA was also missing from outside and found themselves down 21-14 at the 8:15 mark.

With 14:58 to play in the first half, GSU is tied with UT Arlington 8-8. Hervey (who nearly averages a double-double) with two quick fouls

But 4 minutes later, the Mavs offense roared to life with a 14-0 run (including a posterizing Jorge Bilbao dunk) and go up by 7. GSU then got within 1, before the Mavs went on a 6-0 run to close the half (the final play featuring a defensive rebound by Bilbao, who then threw a perfect 70-foot laser beam pass to Faith Pope for a fast-break dunk just before the buzzer…it can be seen about at about 45-50 seconds in on the utamavs.com game highlight video). Mavs 36, GSU 29 at half. And remember, this was for the most part without Hervey on the floor. Gotta think the Mavs with Hervey and only 2 fouls for the second half could be really good.

After intermission, the Mav lead was down to 2 at 36-34 with 18:04 after a couple of free throws and a jumper and the building suddenly found itself eerily quiet, a rare thing tonight. Momentum shift to GSU.

The Panthers offensive approach seemed to be this: look for the open 10-15 foot jumper, not shoot a ton of 3s, drive inside if possible. Dribble in from the arc a few steps, if the defender keeps backing down toward the basket and gives some space for a shot, take it. Fast break whenever possible. And their gameplan seemed to work pretty well for their good mid-range shooters. And they drove the ball inside and got some free throw attempts too. GSU’s big forward Jeff Thomas, a 6-5, 210 lb. redshirt freshman shot 6-11 from outside to keep the lead at 12-15 most of the second half. But overall UTA’s second half 25-15 rebounding advantage and 6-13 second half 3 point shooting was just too much for GSU to make a comeback. Without all those 3s by Thomas, it’s probably a 20-25 point win for UTA. I think GSU is a top-5 Sun Belt team in March. They defend pretty well and seemed to find open shooters all night.

Our guys played really hard. I felt like the first ten minutes we couldn’t get in a rhythm offensively because they match up zones really good. We finally started passing the ball and you could see how our system started to come to life again. I’m proud of our guys.
–UTA Coach Scott Cross

Kevin Hervey, who played just 3 minutes in the first half after committing 2 fouls in the first 3 minutes, had a very good second half. He played 15 minutes in the final 20:00, scored 10 points on 4-6 shooting in the half for 17 points and 8 rebounds and 3 assists on the night. Makes it look effortless despite being double-teamed much of the night. Jalen Jones scored 15 on 6-12 shooting (3-5 from 3), Wilson scored 11 points (3-7 shooting, 4-7 FT) and Erick Neal scored 10.

The Mavs outrebounded GSU 45-29, which is consistent with their nation-leading 44+ a game.

In addition to being undefeated in conference play, the victory was also a big one for Coach Scott Cross: it was his 163rd win, setting the program’s all-time record for wins. He is 163-130 in 10 seasons.

A noisy crowd of 3002 was on hand to see the game. Great atmosphere to see one of the best mid-major teams in the country, a team that seems to be getting even better with each game almost.

It was 7th time the Mavs have scored 75 or more this year. If you want go one step further, it was the 10th time UTA has scored 73 or more in 12 games this season (73 in two wins and one loss)…a ton of points. It was also their 7th win by 14 or more points this season. 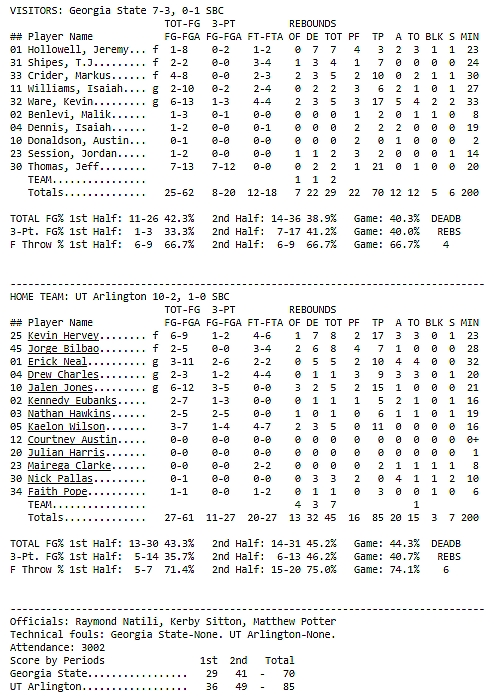